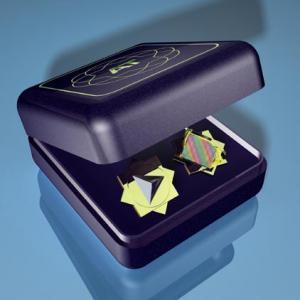 Supplied by Aires Technologies, the Matrix Virtu features crowned shaped earrings, bracelets, rings, and necklaces. These ornaments were created in view of an arrangement most important of biologically active points and zones on a body. The Matrix Virtu contains minerals that are primarily used as arrayal, magic sense; not so much for aesthetic purposes.  The minerals embedded in these jewelries contain healing properties that can protect the individual wearing them from illnesses.

This discovery of the healing powers enclosed in these minerals date back to ancient Rome. Aristotle published book recording information that he assembled on the stones. As a revered scholar with knowledge of science, he expanded his research to studying the colors on these stones and their magic properties in his scientific dissertation.

The very steadfast attention of greatest minds of mankind to natural crystals and their properties is not casual. The crystals are firm bodies, atoms or which molecules form the ordered periodic structure. The symmetry of crystal structure defines the external form of a crystal, and also features of its physical properties.

Russian researchers have recently discovered that minerals radiate waves of the certain frequency. The nature of wave interaction of a crystal and live organism are based on an ancient technique of correction of biological system by minerals. The best efficiency is achieved at occurrence of a counter resonance, and then the more perfectly crystal structure always representing fractal object, the higher is the quality of a resonance.

From this perception, it is necessary to consider the interaction of the crystal structures with the mineral and metal, which are used at manufacturing an ornament. The correctly picked up combination, in view of resonant properties of both substances, will strengthen positive result. The important role here is played by effect of the form - organs of a crystal.

In a rule of thumb, however, the crystal structure of natural objects contains numerous defects, that is reflected both in quality of the crystal, and on quality of interaction of a crystal with organism. For this reason in ancient spiritual large crystals “of pure water ", that is not containing of defects, seen by an eye were especially appreciated.

The technology developed by Fund "AIRES" is enabled to carry out similar correction of biological system on the basis of resonant interactions, but without distortions connected with natural minerals. Fund Aires has recently created a new product - ornaments executed on the basis of the latest technological development. The overlapping of health and beauty is realized in new production.

The jewelry contains a design with the microprocessor resonator representing a silicon plate that is put together by a method micro lithography by the fractal-matrix circuit. The microprocessor is the universal spatial, a wave filter furrier that decomposes and makes wave pulses that are produced by crates of the organism.

The ear is one of the central parts of the nervous system that has located more than hundred biologically active points being as a projection of all departments human organism, and a zone of a solar texture. As a result of arising resonant interaction of these zones and topology of the microprocessor the spatial - wave characteristic of electromagnetic radiation of crates will be re-structured, that is one of determining conditions of processes of local and general character.

By wearing these Matrix Virtu ornaments, the functional condition of nervous system is optimized, by mobilization of function, thus providing higher coordination of actions of systems of life-support and maintenance of homeostasis. You can now retain your beauty while maintaining optimal health.